Be prepared to journey deep into one man’s psyche in Mind the Gap – and emerge with reflections about your own mind and soul.

DON’T look for socio-political commentary in Bayu Utomo Radjikin’s works this time. The artist’s latest solo showcase is, in a nutshell, all about him.
“This is simply a journal of my experiences (from my journey) from Kuala Lumpur to London and back. I’m not commenting on anything; the paintings are open to interpretation,” says Bayu, 38, with an enigmatic smile.
I wonder if I should take what he says at face value? Bayu is, after all, a member of Matahati, an artist collective known for emphatic social commentaries in its group exhibitions. 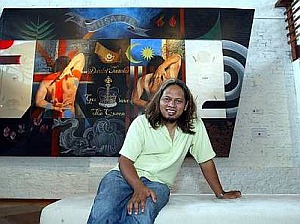 The artist in front of the stunning 11-panel Sand, Skin & Salt (Unfinished) that was painted over a two-year period. Nice to know there’s more to come in this work! – SAM THAM / The Star

(The other members of Matahati are Ahmad Fuad Osman, Ahmad Shukri Mohamed, Hamir Soib Mohamed and Masnoor Ramli Mahmud.)
But then, there was Bayu’s Questing for the Warrior ? A Study, a solo exhibition in 2003 that was also a “probe into the psyche and a journey of self” (as its catalogue put it), so he has done this apolitical “looking into the soul” thing before.
It sounds a tad narcissistic written down in black and white. Yet, when you looked at those works in 2003, they didn’t seem self-absorbed at all. Rather, most triggered self-deliberation and self-reflection in the viewer.
And so to Mind the Gap. It is, says the artist, a sort of retrospective of a pivotal juncture in his life – “all about him”.
Comprising works done during and after Bayu’s two-year (2005-2006) sojourn in London, the show documents the changes he experienced within himself and offers evidence of his creative maturity since that last solo show in 2003. 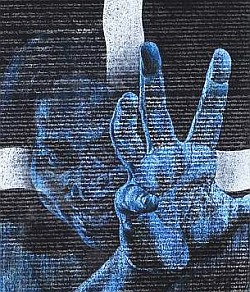 The 29-piece exhibition, currently on at the Wei-Ling Gallery in Kuala Lumpur, offers works loaned by collectors as well as brand new works. They powerfully showcase Bayu’s genius in composition, his superlative understanding of the dimensions of the human figure and his mastery of his medium.
As has been the case since his stint in London, the works feature a fine use of acrylic.
What of the exhibition’s title?
“There are many allusions to the theme I’ve chosen,” he explains. “‘Gap’ could mean the space between the pieces done while in London and those I did when I came back here. Or, in a deeper context, it could mean the changes in my work and my artistic outlook between the time I was in London and in KL.”
(Other, more superficial, contextual connections come to mind: London’s subway system, the Tube, is well known for the recorded voice that intones, “Mind the gap” when train doors open. And Neil Gaiman fans will recall the celebrated graphic novelist created a monster called the Gap – hence the warning to mind the gap, supposedly! – that lives in the space between train and platform in the Tube.)
Entering the gallery, my eye is caught immediately by Puisi Jiwa II that features Bayu with arms outstretched and eyes closed, seemingly in welcome, or baring the soul.
This work wasn’t the first in the exhibition’s chronological order, though, I discover. The seeds of the exhibition were actually two seminal pieces, Angel and All Saints (both have since ended up in private collections), that were completed in London and sent back to curator and gallery owner Lim Wei-Ling in 2005. 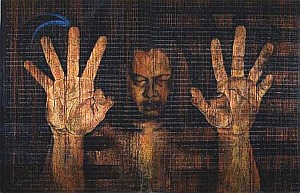 Both works were inspired by Bayu’s personal experience of the London subway bombings in July that year.
Those two were followed by five others that formed the core of what came to be the London series: Conversation at the Square: Trafalgar (2005), Monologue at Tate Britain (2005), Conversation at Piccadilly Circus (2005) and Conversation by the River Thames (2005).
Each piece features an iconic image reflective of the venue alongside selected quotations from William Shakespeare painstakingly painted by hand.
Where the London series displays, to a certain extent, Bayu’s touristy absorption of the locales, the following Europe series – Words At The Acropolis, Athens (2005), The Parc De Cascada, Barcelona ( 2006), Words At The Louvre, Paris (2006) and Words At The Brandenburger Tor, Berlin (2006) – shows a rather more adaptive approach to his surroundings.

The latter series also differs in featuring Malay proverbs instead of quotations from the Bard.
The works that ensued upon his return to Kuala Lumpur earlier this year reveal a fresher aesthetic, a more novel approach to his art and his ideas. Bayu still bares his soul in these works, but does so more subtly.
In these paintings, he offers only partial glimpses of himself – revealing just enough to be identifiable – and places more emphasis on the movement of hands and body.
“I decided that there should be a greater play on body language rather than facial expressions, unlike the London series,” he agrees.
The dynamic use of colour and stroke gives an impression of space and distance. Through the figurative works, he reveals yet again his mastery in expressing every flexed limb, every nuanced movement.

Stroke and colour communicate an impression of space and distance in Tanpa Tajuk II.

In Membayangi, Dibayangi, Terbayang and Bayang (completed in 2007 upon his return to KL), Bayu speaks of one’s state of mind before, during and after leaving one’s own country for another.
“Man is a shadow of his own country; wherever he goes, he is bound to remember his roots,” he explains, referring to himself but, again, making that connection with Everyman.
The pieces show Bayu’s face gradually receding into the background, leaving in the foreground his hands in various contortions, communicating the conflicts of the soul. And, once again, the written word is used to amplify the emotional aspect of each work, this time with the help of the computer, silkscreen and embossing paint.
While the pieces in Mind the Gap are, in general, astounding in the overall impact they have, perhaps the most impressive is the staggering 11-panel Sand, Skin & Salt (unfinished) 2007, painted over a span of two years, both in London and KL.
The piece is a summary of Bayu’s journey to London and back that speaks to the traveller within us, to our sense of displacement, whether physical, mental or emotional.
“It is about my thoughts and emotions before, during and after my sojourn. It is about me – us – being musafir, or ‘alien’, in a variety of contexts,” he says.
In his quest to reveal what resides in his psyche, Bayu displays an astute use of markers pregnant with universal context. All about him? Yes, but this show is also all about us.

Bayu Utomo Radjikin’s ‘Mind the Gap’ is showing until Saturday at Wei-Ling Gallery (No. 8, Jalan Scott, Brickfields, Kuala Lumpur). Hours: noon to 7pm, Monday to Friday, and 10am to 5pm on Sunday; admission is free.