The Edge Daily, 5 October 2006
Life of Barbie
by Laura Fan 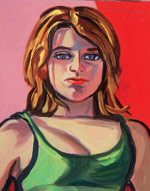 This is especially true of his oil paintings. These paintings feature the same kind of girls, expressing similar stares of bland, cool disengagement. Their expressions reveal a constant awareness of being looked at as they prepare themselves for visual consumption. This is not the face of desire but rather of paid presentation.

MacFarlane’s work on paper conveys greater energy and character. Yellow Buds presents the nude torso of a young woman holding a bunch of daffodils. Standing against a varied blue background, a white halo-like arc frames her face. He uses black, yellow and red to delineate her hair, creating a sense of hard-edged energy. Her elbows, nipples, mouth and nose are all sharp angles. Her violently red mouth expresses an urban harshness that offsets the sugary cliché of girls and flowers. Moreover, the awkward drawing of her left hand as it grasps the flowers also indicates the fact that the act is not natural for her, instead she is only following instructions. Because drawing requires speed, more of the dynamics between artist and model is revealed and there is less opportunity to edit out all of the harshness and artificiality implicit in the poses MacFarlane has set up.
Smaller oil paintings on canvas use several poses from Hefner’s prime. Girl wearing cowboy hat holding melon, nude girl sitting in a chair wearing high heeled pumps, girl lying nude on her side, and in various stages of bra-slippage all appear in the exhibition. They are lit with the same harsh studio spotlight, revealing the constructed nature of the scenes. 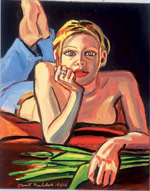 MacFarlane’s use of colour is striking. He uses pure colour to create form. This sometimes results in startling combinations of green, blue and black on flesh tones. These colour treatments inject a sense of jarring discomfort to the scene, again undercutting the overtly saccharine feeling to the works.
In terms of composition, the artist rarely varies his central focus on the nude. There is no doubt what he wants his audience to look at. Breasts preoccupy him excessively and they often feature in the middle or draw the eye with the use of bright colour.
The artist’s brushstroke is often visible as loose, expressive lines. Hands are painted by alternating a putty grey colour with peach. The gleam of a bracelet is expressed in yellow, brown and white lines. Indeed, the works with more varied brushstrokes make for more interesting works rather than those that feature excessively smooth forms and realistic tones.
Given the rise of more graphic material on the Internet and in films and television, these works seem more nostalgic than offensive. They may not exactly provoke deep thought but neither do they challenge notions of female or even male sexuality.