The Star, 24 January 2007
The landscape within the artist
by Vivienne Pal

WHEN Jackson Pollock challenged the Western tradition of easel and brush in the 1940s, he made a statement that impacted the art world to this day.
Pollock’s drip-and-pour technique, a method he perfected through working spontaneously with liquid paint, left art critics polarised for decades after his passing.
Now, some 50 years after his death, artist Hamidi Hadi brings the memory of the abstract-expressionist artist alive by employing a similarly unique technique in his latest exhibition, Alun. 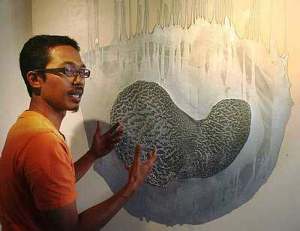 How it was done: Hamidi describing how he achieved the wrinkled glob-like effect with aluminium paint.

“Other artists were wowed by what they saw. Some said it was the artistic benchmark for the year,” said Lim Wei-Ling, who curated the exhibition at Wei-Ling Gallery.
Alun is Hamidi’s second solo exhibition. His first – Indelible Markings – debuted last year.
If Indelible Markings was primarily his expression of the landscape he sees “from the outside,” then Alun speaks of the landscape within him, a self-discovery and personal reflection of life in the modern world. 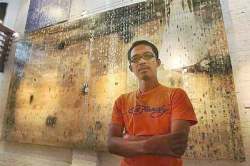 Dwarfed: Hamidi looking diminutive in front of his large-scale piece entitled You Hold My Breath @ Anjur.

“It is a dialogue within me where I also talk about our space – our environment – that is so industrialised.”
In all 15 works, Hamidi glorifies industrial paint through a series of drip, pour and marbling techniques that stupefy the viewer because of the precision and mastery involved in methods that seem ostensibly simple.
What looks like a random mass of textural dots and blotches – some bold and heavy, while the rest are almost translucent and fading into the canvas – result from control of wrist and arm and more importantly, knowing when to stop. 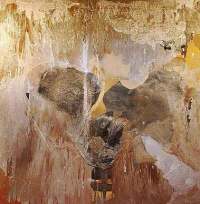 “There is a lot of control involved as I work the piece, layer by layer and manipulate the paint by moving the canvas. The challenge is, knowing when to stop.
“On the other hand, I have a vague idea of what I want but don’t have absolute control because of the nature of the media and the technique involved. I have to explore what’ll happen,” said the 36-year-old Perak-based artist who is also a lecturer at UiTM.
For instance, the large amounts of aluminium paint poured on to canvas in You Freeze Me, named because of the arresting effect it has on the viewer, caused a large, wrinkled glob-like effect which occurred during the drying process. 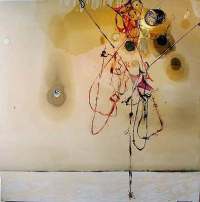 Control needed: In Card IV, the translucent blotches are a result of the oil base of industrial paint, thinned with turpentine.

A similar effect is found in Cuba Menerobos, which resembles a 2D rendition of stalactites and stalagmites.
Hamidi also employed a “marbling technique,” an effect he discovered by dropping industrial paint on water surface before transferring the marbled paint on to canvas.
It sounds easy but requires a steady hand.
On rare occasions, Hamidi uses a brush, finger or hand to enhance his works.
“But only if necessary,” he said. 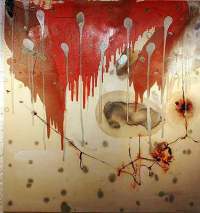 That’s life: Interruption speaks of the disruption of the placid calm of life due to worry.

Hamidi’s most ambitious work in Alun is a large-scale piece aptly entitled You Hold My Breath @ Anjur measuring 254cm x 444cm, on which he spent three months.
“I wanted to produce something big to express how great creation is, and how in awe I am of it,” he said, looking diminutive as he stood next to the large canvas.
Hamidi is clearly pleased with the outcome of Alun but he is just as excited with the discoveries he made in the process.
“It took a lot out of me, but I’d do it again” he said.