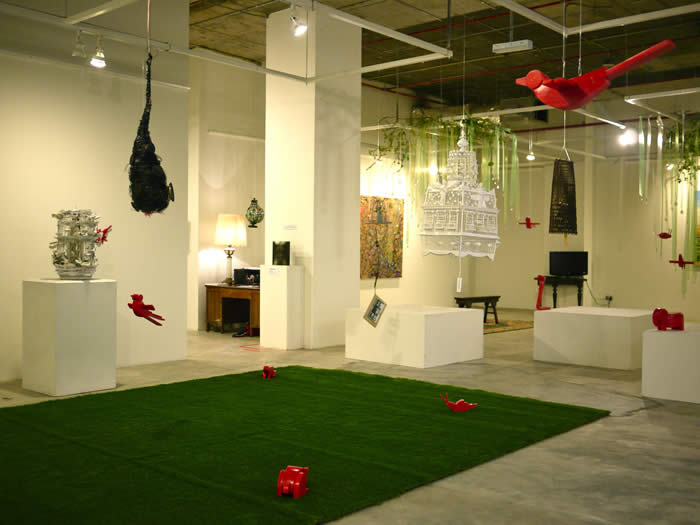 The installation at Wei-Ling Contemporary 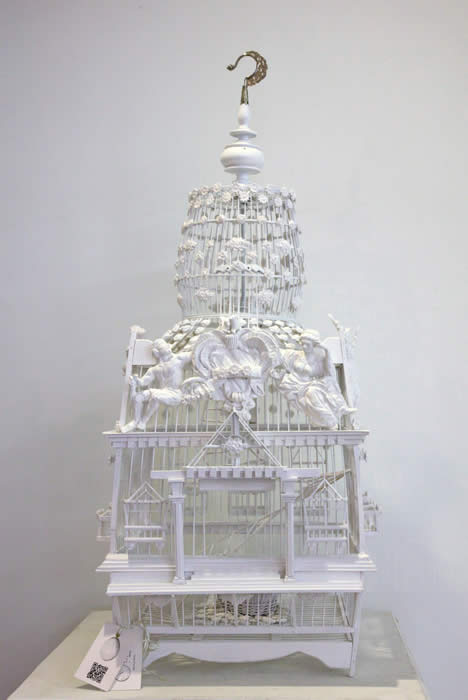 By juxtaposing the miniature sculptures with the traditional birdcage into one, I create a scene that is multifaceted with subjects in layered forms, startling and engaging yet also momentary. I suggest the “accidental composition” that allows unpredictability in 3D work to reflect the experience that results from my unusual cross disciplinary approach to visual-making. My birdcage represents anticipation.

Best known for his abstract paintings that adopt techniques of illusion, Wong Chee Meng has maintained an active presence in our local art scene since the mid-nineties. The artist has two solo exhibitions to his name and in 2007, he was artist-in-residence in the ABN AMRO-Malihon Residency Program in Balik Pulau, Penang. The artist is currently pursuing his MA in International Contemporary Art and Practices at Limkokwing University of Creative Technology, where he is also a lecturer. 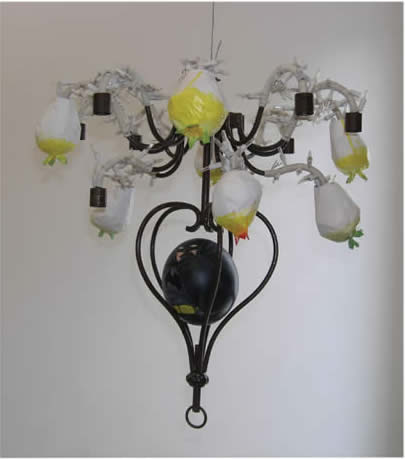 A supereggo is contemplating how to live well among the “beauty” and “beast” of the contemporary world, break the enchantment (limitation) and venture far!

Shia Yih Yiing’s career as a visual artist has seen her works travel as far as Bangladesh, Japan, Czech Republic, and Taiwan alongside her many exhibitions in Malaysia. The artist has 6 solo exhibitions to her name, and her works have delved into themes like femininity and motherhood, often imbued with a sense of playfulness and metaphor. The artist also imparts her knowledge and skill through the art classes that she conducts.

True ‘self’ is the ‘witness’ beyond form, beyond identification, beyond ego, beyond any form of entrapment.

Hasnul Jamal Saidon “is a self-proclaimed seeker of light beyond form”. Coincidentally, he is also the Director of Muzium & Galeri Tuanku Fauziah, Universiti Sains Malaysia, Penang. 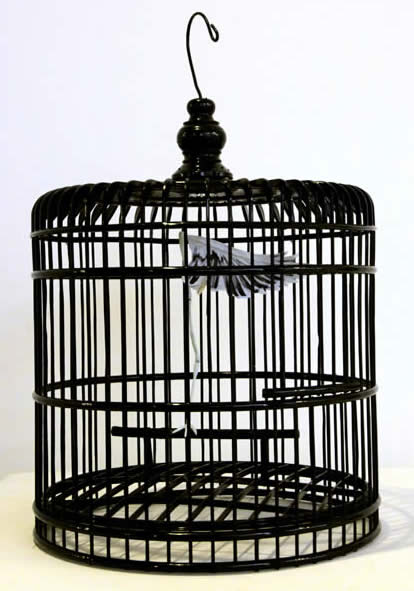 The skeletal bird is a ghost that stays within the birdcage. His physical body is still caged, but his soul is free. He is utilizing his rights by death in his own cage, in front of his owner. How drastic can we become when we are pushed to a corner, choices are limited but choices are there, still.Hailing from Pasir Mas, Kojek graduated from Universiti Teknologi MARA (UiTM) Shah Alam with a BA in Fine Arts in 2003. Between 2010 and 2011, he was the 16th Artist in Residence at Rimbun Dahan, Kuang. Most of his works deal with contemporary issues in an absurd/surrealistic setting with delicate figure collages.

This work is inspired by the peculiar ability of the mockingbird. The mockingbird is the unsung hero in the story of evolution. It played a pivotal role by making Charles Darwin realize that species were not stable units, but changing entities subject to the vagaries of competition. The mocking bird has the ability to imitate not only birds, but also other animals and the most bizarre thing is that the bird is adapting to our urban environment by imitating mechanical and electronic sounds such as car alarms, cell phone ring tone, chainsaws, camera shutter, etc.

The mocking bird alerts us to the possibility that species might change, and they are adapting to changes based on their survival instinct. On the other hand, in our technologically complex environment, technology is designed to imitate nature as closely as possible. Computers are programmed with the intelligence to be human-like.

In this project, I used Obiwannabe’s Puredata (a real-time graphical dataflow programming environment for audio, video, and graphical processing) sketch to synthesize bird sounds, highlighting a phenomenon in urban ecology which is that we are trapped in a universe of simulacra where it is no longer possible to distinguish between real and surreal or between real and artificial. We seem to prefer fantasy over reality.

Lim Kok Yoong – or Wing as he also goes by – is a multimedia artist whose body of work encompasses objects, installations, conceptual works, video, and sound. He held his first solo exhibition, When You Are Not Your Body, in 2008 and has participated in various exhibitions, such as Notthatbalai Art Festival, Norwich Fringe Festival, Bangun – Abandoned Project, and Contempary Art in School (CAIS). The artist has been on residencies in Norwich, England and Tokyo, Japan, and he has been a lecturer in the Faculty of Creative Multimedia, Multimedia University, Malaysia since 2006. 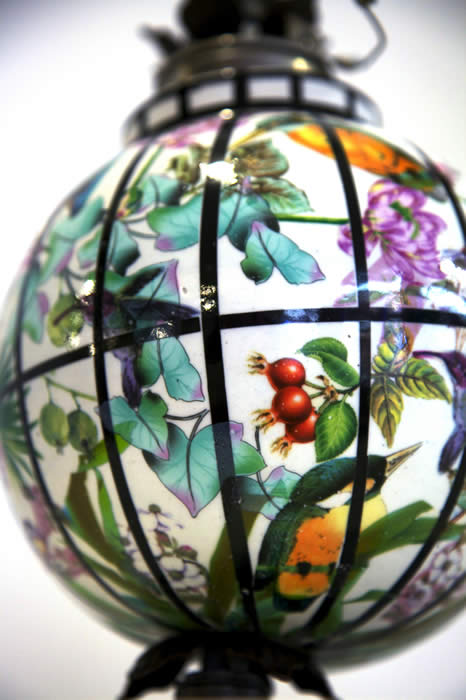 I didn’t feel I needed to get a cage from the shop, so I made my own cage and used lines to create the illusion of an actual cage. My work, Paradise, plays on the specific notion of the bird locked inside a cage; birds are locked inside a small area and the only thing that surrounds them is empty space. I decided to change this predicament and transform the empty space or void in a cage into an area filled with food, flowers, and greenery – a colourful paradise for the birds.

As keeping birds is a hobby and we can’t stop people from caging birds, the best thing we can do is to recreate the best possible environment for the birds as possible.

Umibaizurah Mahir has been a full-time artist since 2004, and is recognized as one of the first artists in Malaysia to develop the medium of ceramics within a contemporary framework. The artist utilizes industrial and fine art techniques to create her works, and her works are imbued with a strong sense of playfulness, femininity, and personal identity. Umi, as she’s better known, also helms patisatustudio, which she co-founded with her husband, artist Ahmad Shukri Mohamed. 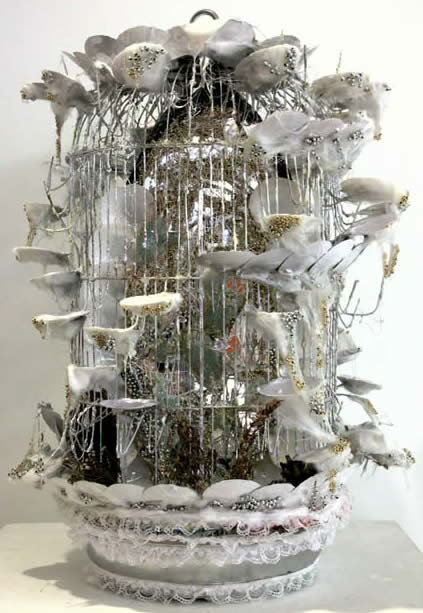 My works largely portray my opinions towards the world at large; they contain the complicated inner psyche.

In my opinion, our world has been influenced and impacted by material worth or substance value. Humans do not know why they exist or know the purpose of life, and they put all their value on material satisfaction. Our hearts and souls have been corroded by materialism for a long time, and although there are some people who are starting to discover the meaning of life, there is still a lack of direction and aim. The nightmare of materialism is still at large and it continues to pollute the souls of human beings.

My work is titled Predicament, and it functions like an incense burner. I wanted to create a tower with shells, beads and lace all coming together to burn in a never-ending cycle. The shells and beads stand for our desire; the mirror symbolizes utopia as it also stands for narcissism; and the lace and beads give off a certain sense of temptation with their softness and fragility.

I enjoy exploring the complexities and contrasting nature of materials in my work. I feel they are in fact interconnected with our daily life, and inspiration for Predicament came from temple structures, and how devotees throw paper into burners as offerings to God. To me, this traditional act is like utopia, and like the mirrors in my work, stands for falsity and an unfulfillable goal.

The lack of direction and aim in society is one of our biggest shortcomings. And like a bird singing competition where owners wait patiently for their birds to sing, most of our acts stem from the desire is just satisfy ourselves.

A native of Yong Peng in Johor, Tiong Chai Heing gained her Diploma in Fine Art from Dasein Academy of Art, Kuala Lumpur in 2008. Now based in Malaysia’s capital, she has participated in various group exhibitions and in 2011, was an artist-in-residence at House of MATAHATI (HOM).

Attachment describes a number of things for me. It tells the story of brief encounters, fleeting relationships or friendships, and even forbidden meetings between two beings.

I have seen this work progress through time and space, and its ‘life’ has been coloured by the chance encounter with a curious bird, which visited my studio. During this brief meeting, there was a sense of stillness and motion, life and lifelessness, and the contrast between freedom and entrapment was strong.

There’s also a sense of melancholy in Attachment, as the winged figure in the work is confined to a cage, and it will forever be trapped behind a structure that contains its emotions and that keeps it silent and flightless.

Khairul Azmir Shoib is better known by his moniker, Meme, and he gained his MA in Fine Art and Technology from Universiti Teknologi MARA (UiTM) in 2004, where he also completed his undergraduate studies. He has been exhibiting since the nineties, and his artworks predominantly showcase strong roots to fantasy and the world of imagination. Working across mediums, the artist recently mounted his third solo exhibition titled Strange Women and Their Macabre Stories. 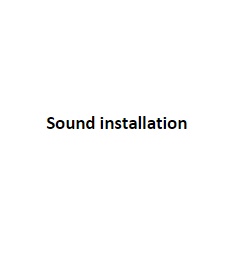 While lecturing in the garden, Plato repeatedly reminded his students that a work of art is nothing but mimesis, a second-degree removal from truth, that it is just a copy of a copy of the Ideal Form.

But his student Aristotle contested that art is a mimesis in the sense that it is an imitation of nature, that it is a copy of an idea which originated from the mind of the artist.

As I imitate the sound of a bird, calling out, singing, I wonder in what manner art imitates life, nature or truth. I am imitating an imaginary bird sound, as in my recollection of what birds might sound like with my limited skill of imitating them. So what do I really copy, in the manners as the two philosophers above have suggested?

Or am I just imagining my attempt of communicating with birds, using what limited whistling technique I have?
Do I trick myself, or the birds and others?
This life is indeed a garden-full of artifices 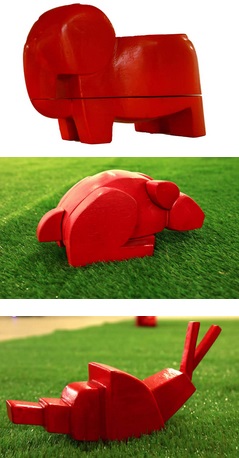 The impetus behind my participation in this show stems from my love of nature. Pets that my family has kept have always been treated like real family members, and I have a deep and profound respect for animals and our natural world.

Every day, a significant number of birds flock to my home, where I feed them breakfast, lunch, and dinner. The injured birds usually keep their distance as they are wary of human interaction, but mostly, they are curious and friendly.

Humans and animals share a strong bond and I do not believe in cages at all.

Animals have always been a part of my work, whether I have used them as symbols or as subject matter. The animals in my installation are observers of the competition, guests who have come to see the show. They fly around to peer into the cages on display, and they are scattered across the space, mingling with human guests.

These sculptures have been shown before, but I have painted them red this time, which offers a sense of friction and symbolizes how they haven’t been understood properly before.

Jeganathan Ramachandran is a multi-talented artist, author, poet, sound analyst, and more. He studied traditional Indian painting (Tanjore Art) under the wise guidance of Babu Surender in Chennai, India in the early eighties, and went on to gain additional skills in granite sculpturing, Indian classical music, and Tantric Art too. He’s also founder of Symbols House of Natural Art and Symbols Art Club.