Teh Tarik with The Flag

Teh Tarik with The Flag features 13 selected prominent Malaysian artists to explore the symbolic power of the flag as a means to reflect on and extend the rich and complex story of the ‘Jalur Gemilang’ as a potent symbol and a marker of identity, unity, belief, and division.

A quintessential symbol of Malaysia’s national identity, the ‘Jalur Gemilang’ is composed of a field of 14 alternating red and white stripes, a blue canton bearing a crescent, and a 14-point star known as the ‘Bintang Perskeutuan’. Imbued with meaning, each design element speaks of the values ingrained in every Malaysian. The 14 stripes represent the equal status of the member states, while the 14 points of the star represent the unity inherent between these entities. In terms of color, blue is present to symbolize the unity of the Malaysian people, red to signify the strength and courage in facing challenges, white to remind of the importance of integrity, and yellow to indicate the royal colors of the rulers.

Yet, beyond the intended symbolism behind its star, stripes, and colors – be it nationalist pride or unity, the flag incites a response from its citizens that is anything but natural. For seeing it fluttering in the wind evokes patriotic feelings and reminds us of national values. One only need to think of the presence of the ‘Jalur Gemilang’ at the Olympic games to remember how the flag not only denotes glory, but brings the whole nation together, especially in times of social and political unrest. In the same vein, depictions of the flag that reduce its meaning as a sacred object, such as the act of burning it, feel increasingly personal to the majority of citizens, and thus ignite strong responses. Our unwavering attachment to the flag and the emotions stimulated by the sentiments embedded within it speaks of the power of symbols in reaffirming our collective identity. As a static representation of stable ideals, the flag makes concrete the abstract notion of nationalism, which as French Sociologist Emile Durkheim noted, would otherwise have “an unstable existence”.

And while the ‘Jalur Gemilang’ is the people’s flag, its salient point being to condense the nation’s ideals and represent its people, the power relations built into the symbol can sometimes create a hierarchy between the flag and the people it represents. Thus, the exhibition title,  Teh Tarik with The Flag, aims to bridge this gap and bring the flag back to where it belongs: back to the public. ‘Teh Tarik’ a popular local drink that has become synonymous with Malaysians, is unique in how it brings Malaysians together everyday. It is in these everyday interactions, often times in coffee shops, that the public comes together to share their hopes, concerns and points of view, with one another about everything ranging from politics to the price of vegetables. In these informal settings, stories emerge. Day by day, they become the narrative that shapes Malaysia, and eventually the narratives that are woven into the ‘Jalur Gemilang’.

Taking the flag as a point of departure,  Teh Tarik With The Flag sees Malaysian artists reflecting on the poetics of the ‘Jalur Gemilang’ by employing different artistic strategies to create compositions that reference the flag, but also go further to disrupt its formal qualities and extend its symbolic meaning. As the presence of flags is omnipresent throughout the country, it is often seen, but not looked at or examined. In using the flag-as-art icon, the resultant works provoke a reexamination of this all too familiar image.

In transcending the flag’s essential attributes (color, shape, texture, medium, size), we envisage that the artists will skew the usual visual character of the flag, rendering it in different forms while still retaining its essential symbolic quality.

The meaning and emotional efficacy of the flags resonates with every citizen, and more than a symbol, it is a living entity, a sacred object that transcends its physical materiality. In  Teh Tarik with The Flag, artists reference the ‘Jalur Gemilang’ to negotiate and investigate ideas relating to identity, nationalism, citizenship, as well as delve deeper to highlight the power structures they represent, and possibly conjure up new images for alliances and allegiances. More importantly, we hope the exhibition will establish new connections between the people and their ‘Jalur Gemilang’.

The exhibition presents works that invite the public to think carefully, both symbolically and visually, about how flags foster a sense of belonging, how we utilize them to assert our identities and express our connectedness to the world around us, and how they become key symbols in uniting or dividing a nation. 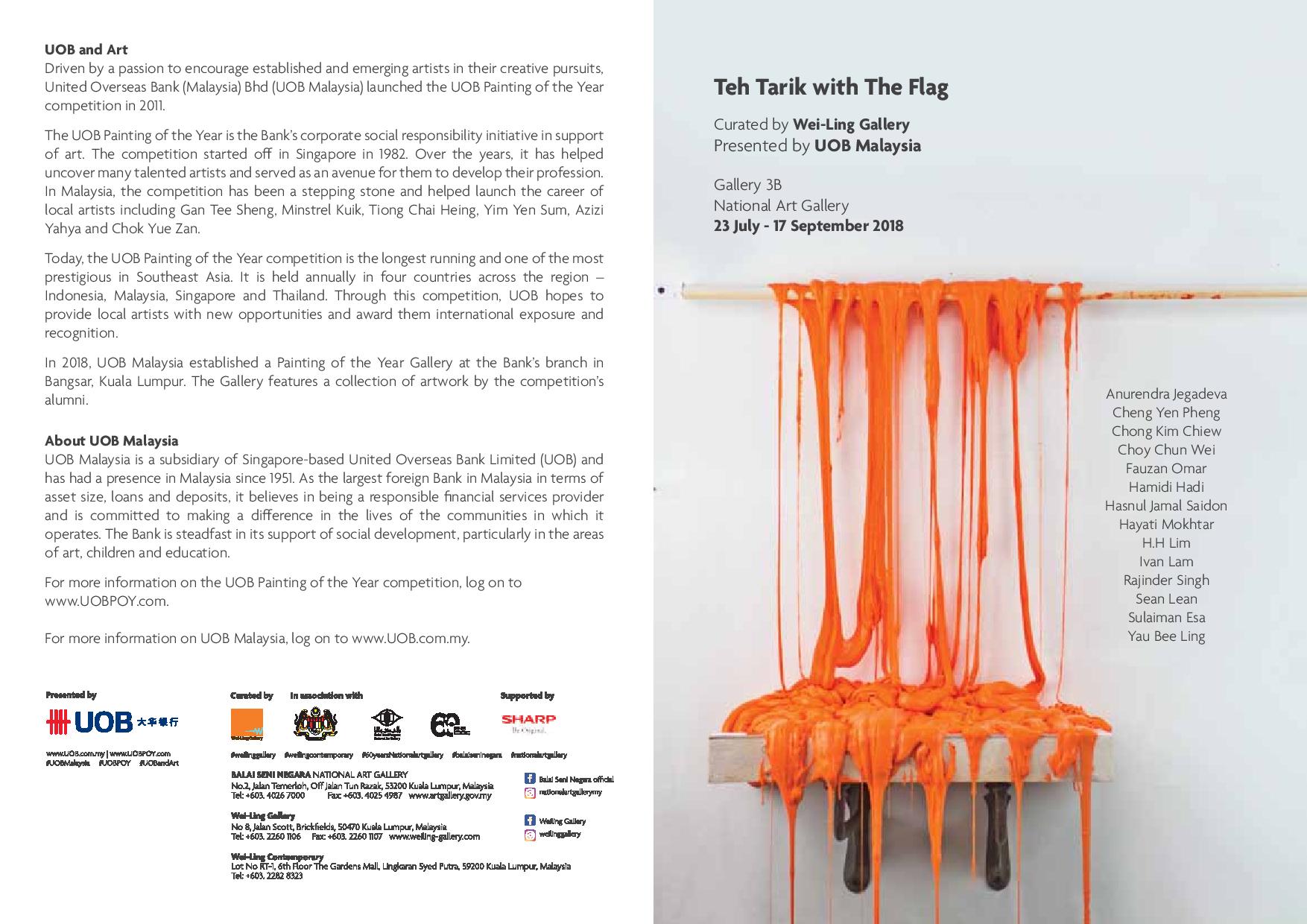